Why is it hard to say ‘no’ to gambling urges?

When people make a change to their gambling behaviour, it is very common for them to have urges to gamble. Even the most committed person can still struggle with urges. Saying ‘no’ to an urge is not as easy as it sounds. Let’s read on to explore what happens in the brain to cause these urges.

What Parts of the Brain are Involved in Urges? An Overview.

There are multiple parts of the brain that are involved in urges. We will talk about three main parts here. The first part is your brain’s Attention Network (including the Habit Hub and the Dorsal Anterior Cingulate Cortex (dACC)). It can become overly-sensitive to gambling cues. For example, people who have gambling problems are far more likely to notice gambling commercials, signs for gambling establishments, or even the look and feel of money.

At the same time that the Attention Network is processing all these cues, it may not be communicating with other areas of the Top-down Control Network. The dACC and the medial Prefrontal Cortex (mPFC) – which are both part of the Top-down Control Network (Figure 1)- may not be talking very well to each other. If communication is poor between these two areas it means that people may have difficulty ‘putting on the brakes’ when faced with a gambling urge.

The third part of the brain involved in urges is the Insula (Figure 1B). The Insula is responsible for processing physical sensations and emotions (including urges). It will also drive you to want to do something about those urges (i.e., go gambling to ease the discomfort). With so many parts of the brain involved in gambling urges, they can feel like powerful, full-body experiences that hold your attention hostage.

It Matters How We Understand Gambling Urges

Urges are crucial to the development of addictive behaviour and relapse. So, it is very important to understand how and why gambling urges occur.

Urges are a key reason why gambling problems happenin the first place. When experiencing urges, one way to alleviate their discomfort is to ‘gamble them away.’ The more often this happens, the more likely a gambling habit will form. Gambling urges are also a major reason why people relapse and why they drop out of treatment. Strong urges can happen at any time and people are not always prepared for them.

Relapses occur and sometimes a desire to quit treatment follows. The better we understand urges, the more prepared we can be when they come and the less upsetting they are to our lives.

What’s Happening in The Brain When You Have an Urge?

So, why doesn’t the pleasure of gambling last? Because the brain quickly learns what it needs to do in order to get a reward. And, as behaviours become well-learned, engaging in them does not light up the ‘Reward Hub’. Instead, the ‘Habit Hub’ is activated. Once a behaviour becomes a habit, it is almost automatic – we don’t really have to think about it anymore and it is not as pleasurable as it once was.

One way researchers study gambling urges is by exposing people to gambling cues and then observing the brain’s responses. Brain scans show that when exposed to gambling cues (e.g. watching videos of other people gambling, seeing pictures of gambling or hearing gambling sounds), people with gambling problems report increases in gambling urges. We can also see changes in activity in their Top-down Control Network, which includes the mPFC and dACC.

As we saw in a previous Handout, Gambling as an Addiction, the mPFC is involved in paying attention and stopping a response. The dACC is a close neighbour to the mPFC. Its main functions are directing your attention, noticing when things are going wrong, and regulating emotions. It’s almost as though this area lights up to say: “I’m noticing that something is not right. Let’s see what other brain areas I can contact to do something about this…” The dACC is very important because it can draw attention to the discomfort of an urge and potentially nudge its neighbour, the mPFC, to stop or change direction.

People with gambling problems may show differences in how these brain areas talk to each other and to the Reward Hub. In a recent study, researchers showed participants cues tailored to their personal gambling preferences. For example, while they were in a brain scanner, if participants were sports betters, they were shown pictures of sports betting; if participants preferred roulette, they saw pictures of a roulette wheel. Compared to people without an addiction, the problem gambling group showed increased activity in the dACC, in the Striatum but also in the Insula.

This means that the Reward Hub was engaged (the Striatum ‘lit up’). It also suggests that the dACC may be paying more attention to these cues and trying to regulate the emotions around them. The emotions could be pleasure or discomfort depending on how the participant experienced seeing the cue. The Insula activity was directly related to gambling urges in the problem gambling group: the higher urges they reported, the greater activity was seen in the Insula. Essentially, the Insula was saying “You are feeling badly – go do something about that!” (i.e., gamble).

So, what’s the bottom line? When exposed to gambling cues that increase their urges, people with gambling problems show more activity in all of these brain areas. This is how urges can take over: with all of your attention focused on a gambling cue and your brain highlighting negative body sensations, it can be really hard to say ‘no’ to an urge. Your whole body is consumed by the urge!

Here is the good news: there is a relationship between gambling urges and abstinence from gambling. The longer you go without gambling, the less urges you will experience even after seeing the gambling cues that normally trigger you. This suggests that brain changes are happening over time to make the attention networks less sensitive and reactive.

Given what we just learned about the brain and responding to gambling cues, which of the following might put you at-risk for a gambling relapse or strong urges?

Answers: The answer depends on you! Each of these scenarios could trigger an urger to gamble. Be mindful of your responses to any potential trigger.

What are your triggers? Think about times when you have had an urge and what was happening just before. How did your body feel? What did you do about the urge? Would you do anything differently?

Saying ‘no’ to an urge is not always easy. This is because of changes in the brain that occur once gambling has become a problem or a harmful habit. Many parts of the brain are involved, including: the Striatum (which makes you overly-sensitive to gambling cues), the dACC and the mPFC (involved in attention and ‘braking’), and the Insula (signalling gut feelings). This is why an urge can feel like a powerful, full-body experience and why willpower alone (without other strategies in place) may not be enough to stop you from acting on an urge. The good news is that staying in treatment and abstaining from gambling can lead to fewer urges and less sensitivity to gambling cues. Talk to your counsellor about other strategies that might work best for you. 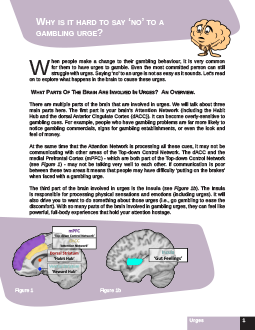